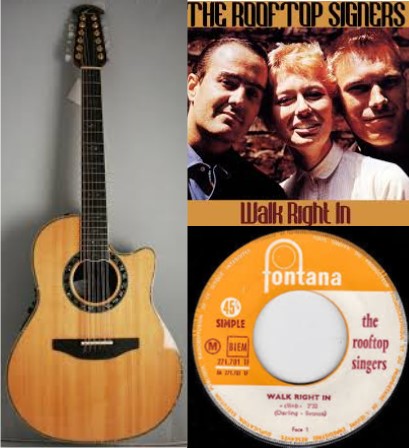 Our version was inspired by the 1962 recording by The Rooftop Singers and includes the signature 12-String guitar that was featured in their cut. From Wikipedia, "group member Erik Darling recruited two friends to record this folk version of "Walk Right In" after hearing the original Cannon recording. Darling wanted their record to have a distinctive sound, so he and Bill Svanoe both played twelve string guitars on the song." Turns out getting those 12-string guitars wasn’t so easy. Darling is quoted as saying that prior to the making of this record, "you couldn't buy a 12-string guitar...I ordered one from the Gibson Company, but in order to record [the song] with two 12-strings, we had to wait for the company to build a second one for Bill!" (He was left-handed.).

(An aside note from Shauna...As we all know, this is not the first recording of this song made for square dancing, but this was another “pet project” for me. I love this song. It was one of the first I learned (using another label’s track, pitched up +5). I am SO excited to finally have a track that doesn’t need to be shifted, and also includes some background vocals (and that 12-string). Male vocal range callers…You get a new one too, because I wanted a new female track! Lucky you!)

Scott Smith delivers another great vocal for the male vocal range track. (He makes it clear why we call him “Great Scott.”) He perfectly captures the attitude of the song and uses a fun, and different, basic figure. The female vocal was recorded by Producer, Shauna Kaaria

Both are being sold separately since they were produced separately, but we do have a dual-key option at a discounted rate for those who prefer to have both keys.